I honestly didn’t watch all of these videos all the way through, and I probably didn’t watch them carefully enough either. If I had, I might have spared myself some painful “lessons learned” which left my Surface worse off than before (well, aside from the screen, which is now once again intact). In this article, I share the lessons I learned during the replacement, on the off chance that someone else might benefit from them.

Note: This isn’t a complete recipe for replacing your screen. Go watch the videos. This is just the stuff I didn’t pick up from watching the videos. Though who knows, maybe if I’d watched more carefully or paid more attention, I would have.

First, and most importantly: if you use a spudger carelessly along the top edge of the Surface (the edge with the camera), you will probably destroy your antenna assembly, and nobody sells replacements. You can see the antenna assembly in this section of the aforementioned teardown. Here’s the photo in question (click this photo and others for larger versions): 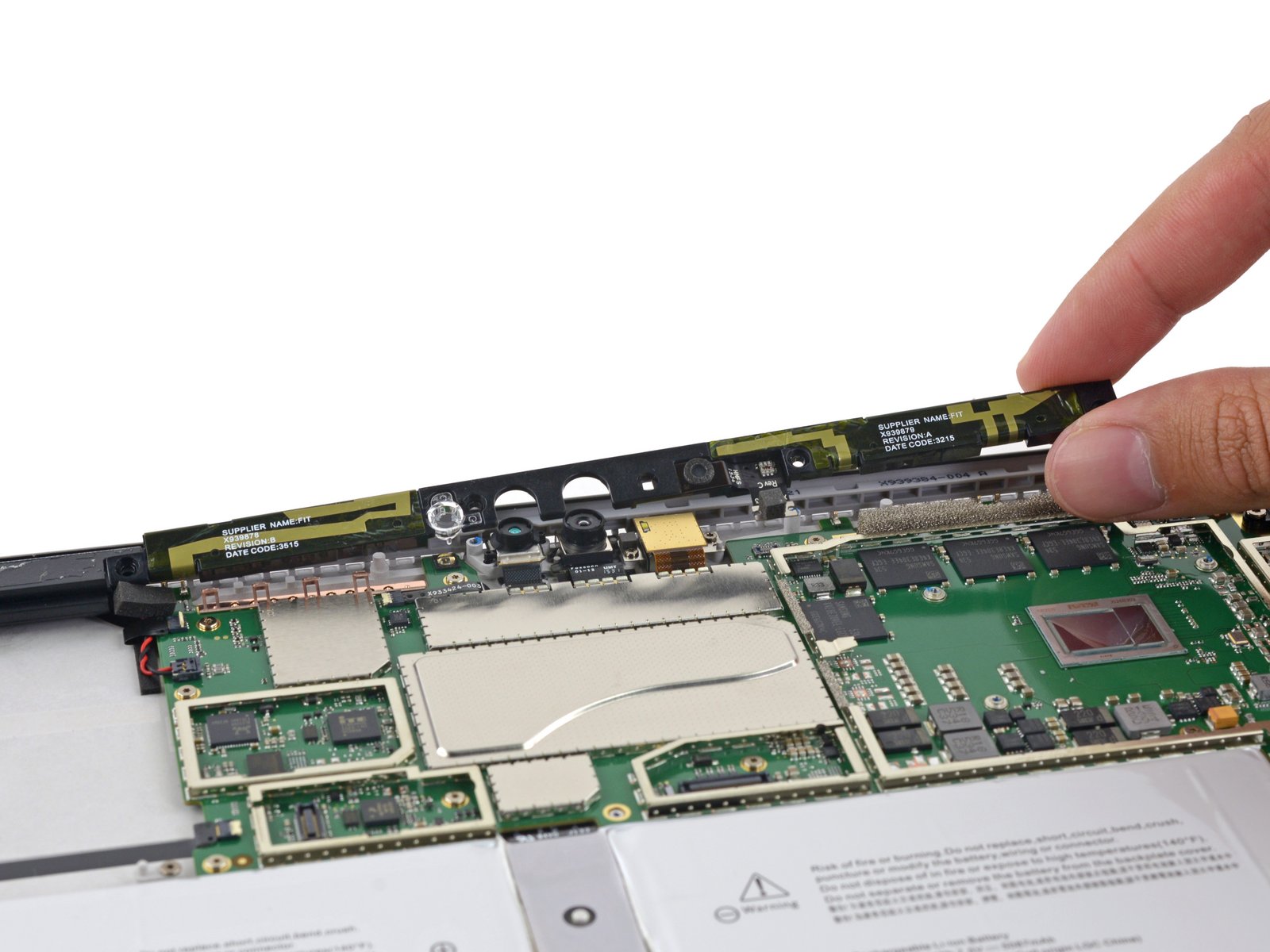 See those three windy yellowish strips, one to the left of the cameras and two to the right? They’re conductive tape which folds under the plastic and makes contact with terminals on the motherboard when the pictured part is screwed in properly. If you carefully remove the screen along the top edge by warming the adhesive with a heat gun and then carefully prying the screen away from the loosened adhesive, then hopefully you’ll be fine. However, if you chip away at the screen aggressively, e.g., because the top of your screen is shattered (as mine was) and you’re scraping pieces off bit by bit, then there’s a good chance you’ll tear the conductive tape or rip it completely off of the assembly, destroying one of the three antennae. I’m not sure why there are three, but I suspect one is for 2.4GHz WiFi, one for 5GHz WiFi, and one for BlueTooth; I don’t know which is which.

So, what can you do if you’ve found your way here too late, after ruining one or more of your antennae? Well, as I mentioned above, nobody sells replacements for this part. Microsoft refuses to sell replacement parts (lesson learned too late: that’s a damn good reason not to buy the Surface!), and it doesn’t appear that there are any third-party manufacturers of this part. You’re not the only one with this problem. So the way I see it, you have five other options:

I started by laying down some 5mm double-sided tape (the same tape I would be using later to mount the replacement screen) on a piece of heavy-duty foil:

Next I trimmed it to approximate the shape of the antenna I’d destroyed:

Here it is flipped over and laid out on the antenna assembly before I’ve removed the tape backing and glued it down permanently:

If you look carefully you can see that there’s a little hole on the left that it appears the antenna is supposed to avoid covering, so I did. There’s another hole like that on the right, though it’s hard to see that one in the photo.

Here it is with the backing removed from the tape and the new antenna fastened into place:

You can see the hole on the right in this photo. Finally, here’s the antenna assembly reinstalled in the Surface:

Now I’ll be honest with you… I don’t know if this aluminum foil antenna actually works. For all I know it’s a complete dud. I mean, WiFi is working in the Surface (though not all that well), but for all I know, maybe that’s because the WiFi actually uses one of the other antennae. But hey, desperate times call fo desperate measures, and it was either this or spend a minimum of hundreds of dollars to fix or replace the Surface.

Now that we’ve gotten that disaster out of the way, let’s move on to the other things I learned that you might benefit from knowing…

The speaker output slots are along the left and right edge of the Surface near the upper corners. If you look carefully at the screen before removing it, you will see that the screen glass is slightly indented to expose the slots. When you’re removing the screen, try not to use the spudger too aggressively here, or you’ll scrape the black cover off of the slot. This is probably just cosmetic, but still, no reason to damage it if you don’t have to.

You have presumably learned from watching the videos (you did watch the videos, right?) that you need to remove the logic board from the corner of your old screen and tape it to the same location on the new screen, because replacement screens don’t come with the logic board. When you’re taping down the logic board, make sure it’s all the way in the corner of the LCD, as shown here. Otherwise, it’ll press against the internals of the Surface when you go to tape down the new screen, and the screen will bulge there.

When you’re connecting the two ribbon cables from the new screen to the logic board, you need to make sure the cables are in all the way, as far as they can go. If they aren’t, your touch screen won’t work.

After reconnecting everything, test the screen before taping it down. Why? Well, for example, you don’t want to discover after taping down the new screen that you didn’t push the ribbon cables in far enough!

I used 5mm double-sided tape to tape down the screen. Unfortunately, much of the circumference of the Surface is too narrow for 5mm tape. I ended up cutting strips of tape in half lengthwise to compensate for this. If I have to do this again I’ll probably order 2mm double-sided tape to make the process faster and easier.